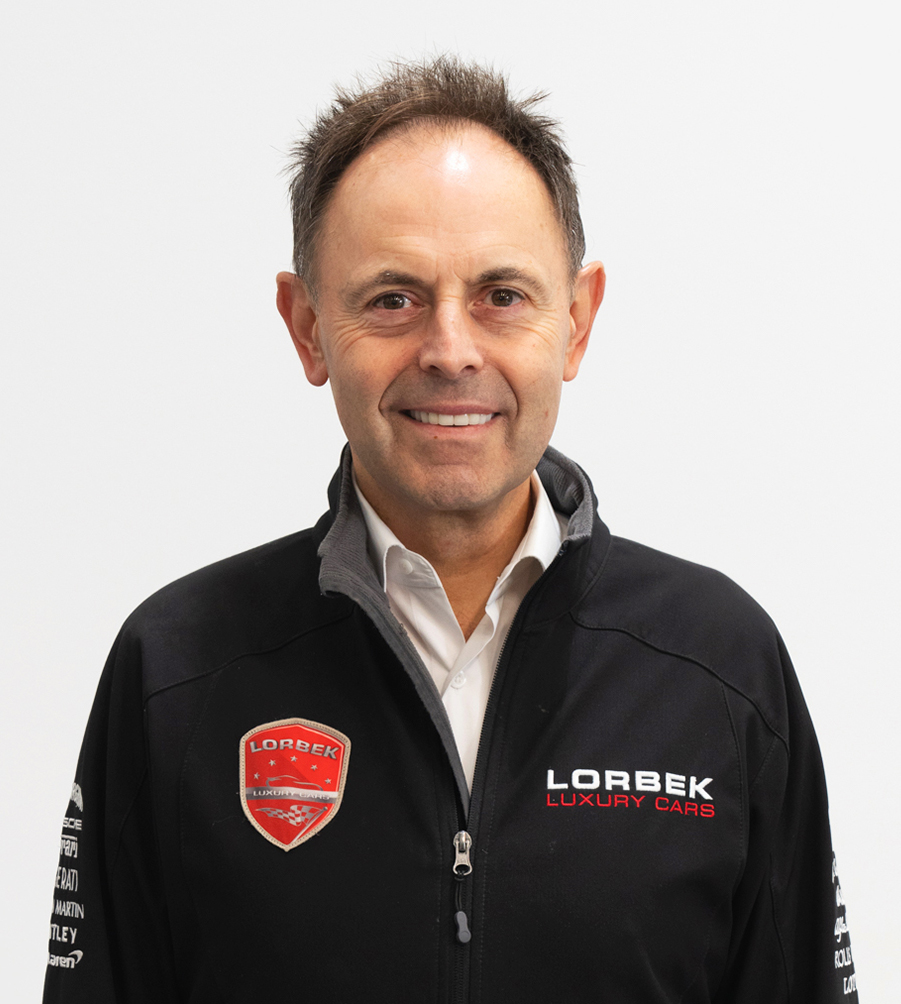 Having begun his careers in 1981 as a young enthusiastic motor mechanic with a strong passion and genuine appreciation for sportscars, Srecko Lorbek is now of the most prominent leaders in Australia’s Automotive sector, buying and selling luxury cars, supercars, exotics, collectable classics and bespoke vehicles nationwide, he has earned the respect from his peers. Srecko has been in business for over 35 years, first starting SOS Motors in Richmond servicing and repairing vehicles and specialising in Volkswagen, he then branched out to other European brands and then established the first Lorbek dealership in Fairfield in 1989 and now in Port Melbourne which spans almost 2 acres undercover full of exciting cars. Srecko Lorbek has now expanded his dealership network in Sydney, with Lorbek Rushcutters Bay. His character is defined by his professionalism, attention to detail and competence in all facets of business, the ever-expanding Lorbek Group of Companies are built upon the hard work and energy depicted by Srecko Lorbek. Srecko has visioned the concept shift in technology and car ownership in Electric Vehicles, he believes that electrification is no longer the future, but today’s reality. Srecko’s advocacy in the EV sector has seen many other people within the industry shift their previously steadfast views and focus on today’s technology, not yesterday’s, hence the establishment of GET Electric (Global Electric Transport) which he heads with a focussed dedicated team. Sitting on several Automotive committees, Srecko brings astute advice within the Automotive Industry with a wealth of experience, he has now become an authority within the industry buying rare cars, building private collections and advising vehicle investment funds in a vast range of areas including the future of automotive travel. The vision for Lorbek has always been and is to be the most recognised used Luxury Car brand in Australia and share the Lorbek car passion with as many people as possible across Australia. 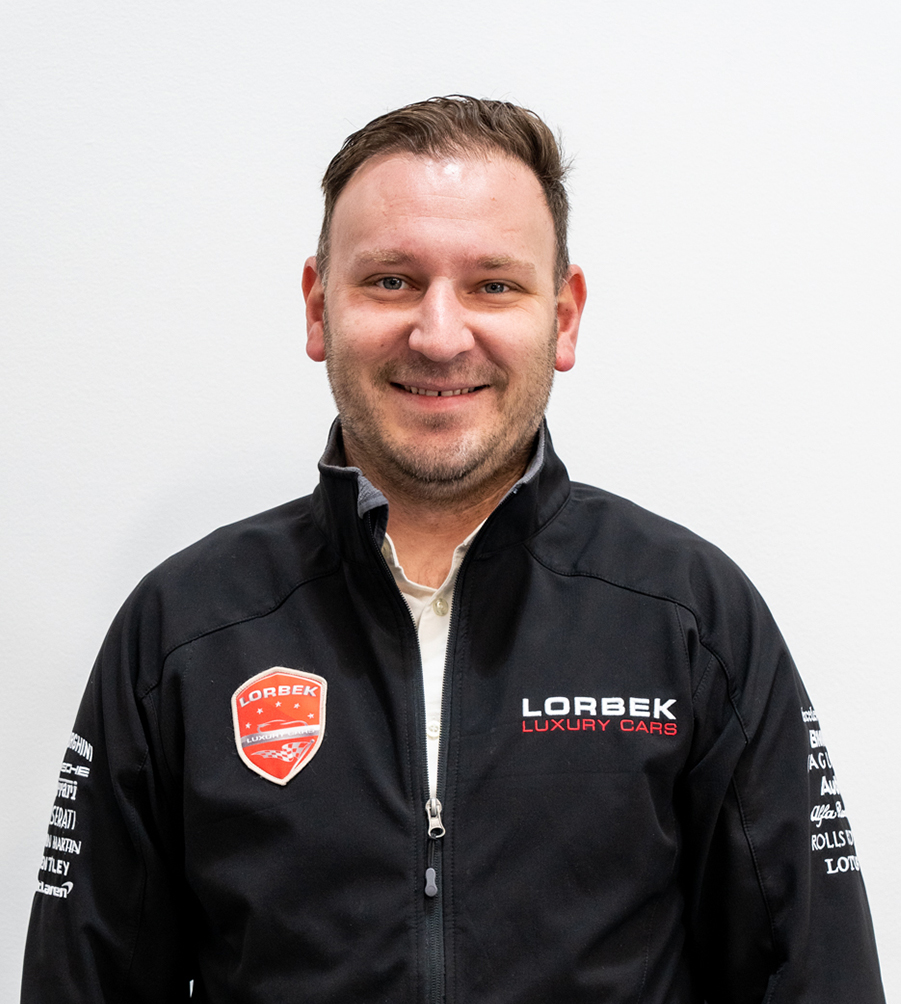 Ilija is appointed as the CFO (Chief Financial Officer) for the Lorbek Group of Companies. Ilija completed his Bachelor of Business (Professional Accountancy) Degree at RMIT University. His career spans over 10 years within the Lorbek Group, with experience in financial management, business leadership and corporate strategy. He is responsible for all the company’s financial functions, including accounting, audit, corporate finance and investment strategies. He also oversees and manages all the human resources and facilities activities. He has built a very strong relationship with many repeat customers, past and present employees, and particularly the Executive Chairman and Founder Srecko Lorbek. Ilija is also an integral member of EAA (Electric Automotive Australia) and GET Electric (Global Electric Transport), which are two companies growing rapidly in today’s evolving market towards Electric Vehicles and clean Green Energy. 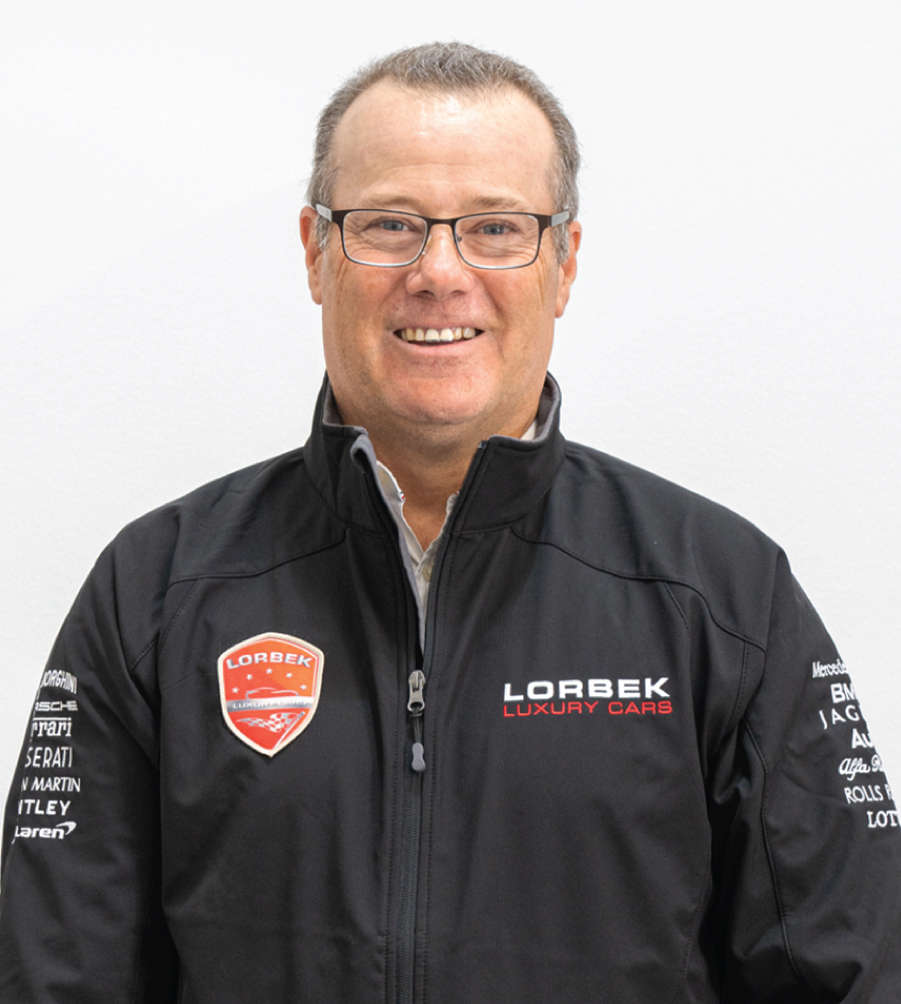 Ever since building a billy cart with his dad at three years old, Kurt discovered he had a strong passion for cars and speed. This fascination for beautiful machinery naturally developed into a career in the automotive industry. Starting in vehicle sales, Kurt evolved to become the Director of his own chauffeured limousine company with a fleet of high-end vehicles. It was when Kurt earned the moniker of Lorbek's preferred chauffeur that he embedded himself in the Lorbek customer service plan. Kurt now heads our Sydney showroom as Operations Manager to oversee the day to day running of the business and provides dedicated customer service. Kurt has a keen eye for detail and a professional approach. For any enquiries please pop into the new Sydney showroom for a coffee and chat how he can assist you at Lorbek Sydney. 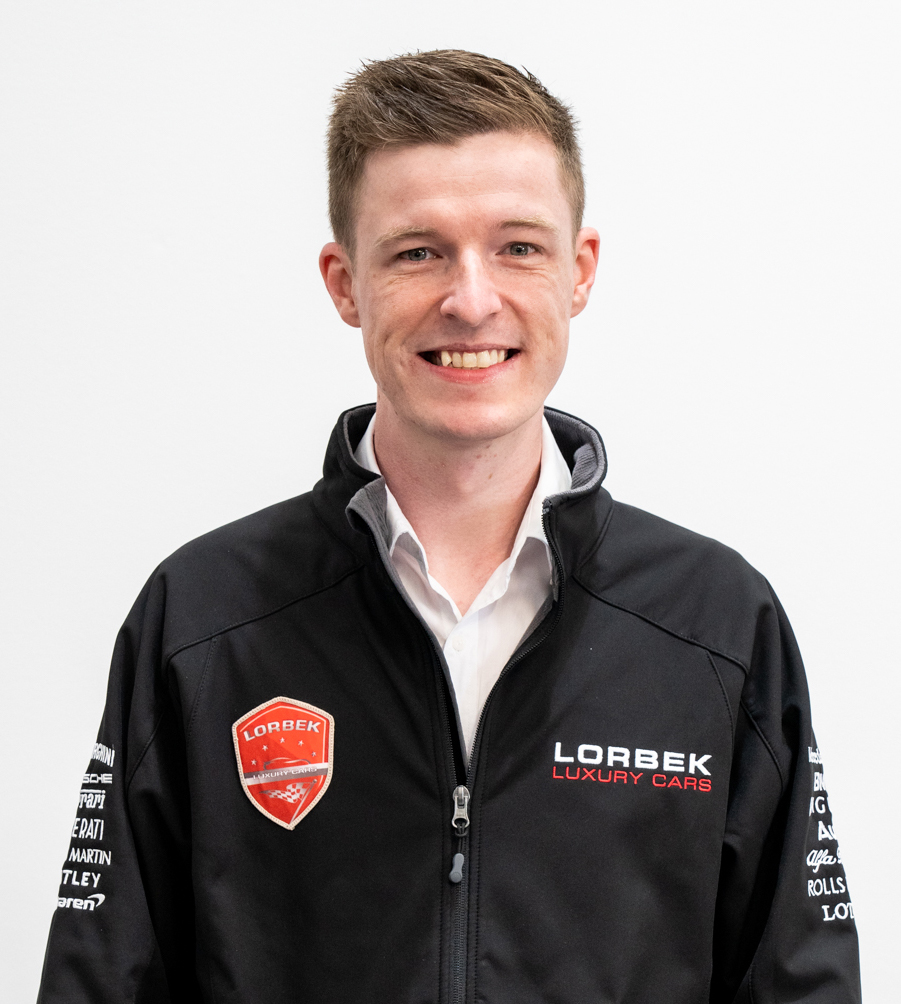 Chris is responsible for the management of all IT systems at Lorbek Melbourne, Lorbek Sydney, and across the entire Lorbek Group of companies. Chris has been in the IT industry for over 10 years and brings a wealth of experience and growth in this ever-evolving IT world. As the world transitions to Electric Vehicles, Chris is responsible for all the backend IT systems, Software Development, Architecture and Design for our sister company GET Electric (Global Electric Transport) with the implementation of our in-house built and designed Mobile Infrastructure Phone App, Web Management portal for the EV Chargers, and R&D for the future of Electric Vehicles. We will all be driving Electric Vehicles one day soon, Chris’s vision for the future of Automobile travel is being realised at Lorbek. 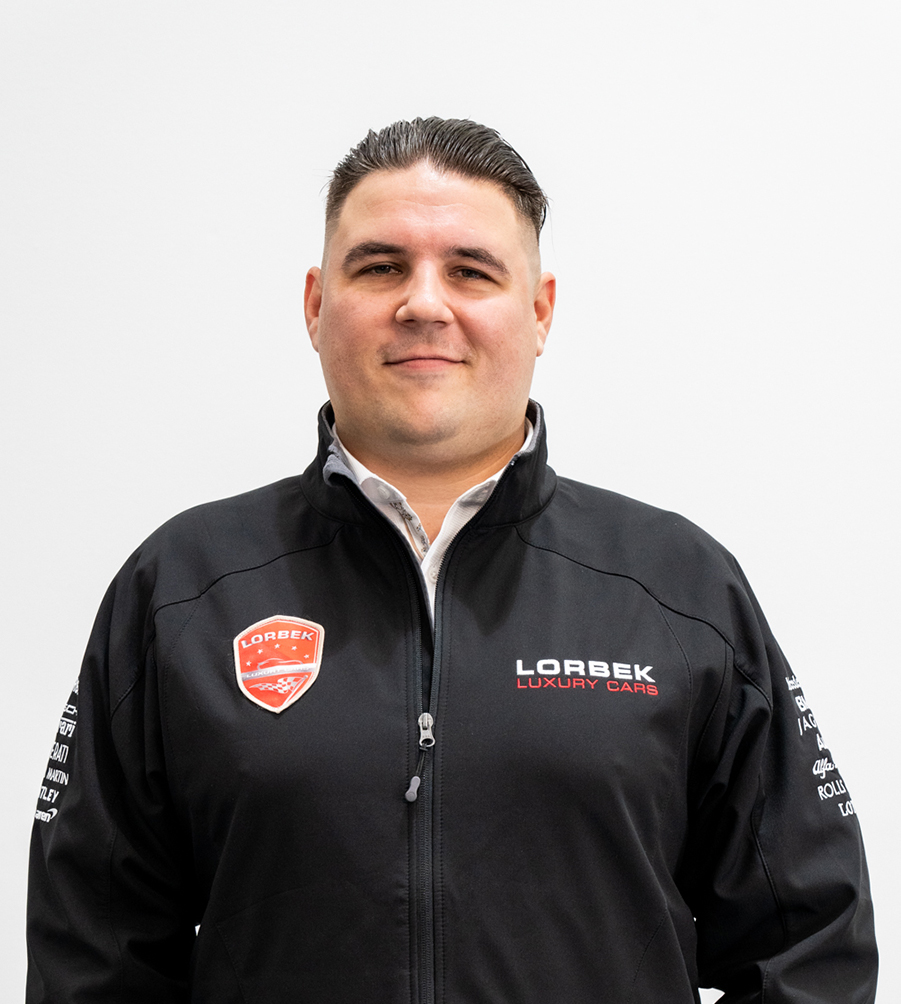 Daniel has worked in the Automotive Industry for over 15 years across multiple brands and departments, including spare parts, service advising and insurance. As a member of the sales support team, Daniel utilities his experience to make all the required and necessary preparations delivering sold vehicles across Australia with a strong focus on providing the best possible customer service. Daniel directly liaisons with logistic companies, communicates our extended warranty program packages with clients, and is a direct point of contact for vehicle maintenance advice. His commitment to ensure and provide the best personal customer assistance is invaluable to Lorbek, Daniel is an integral part of the Lorbek experience. 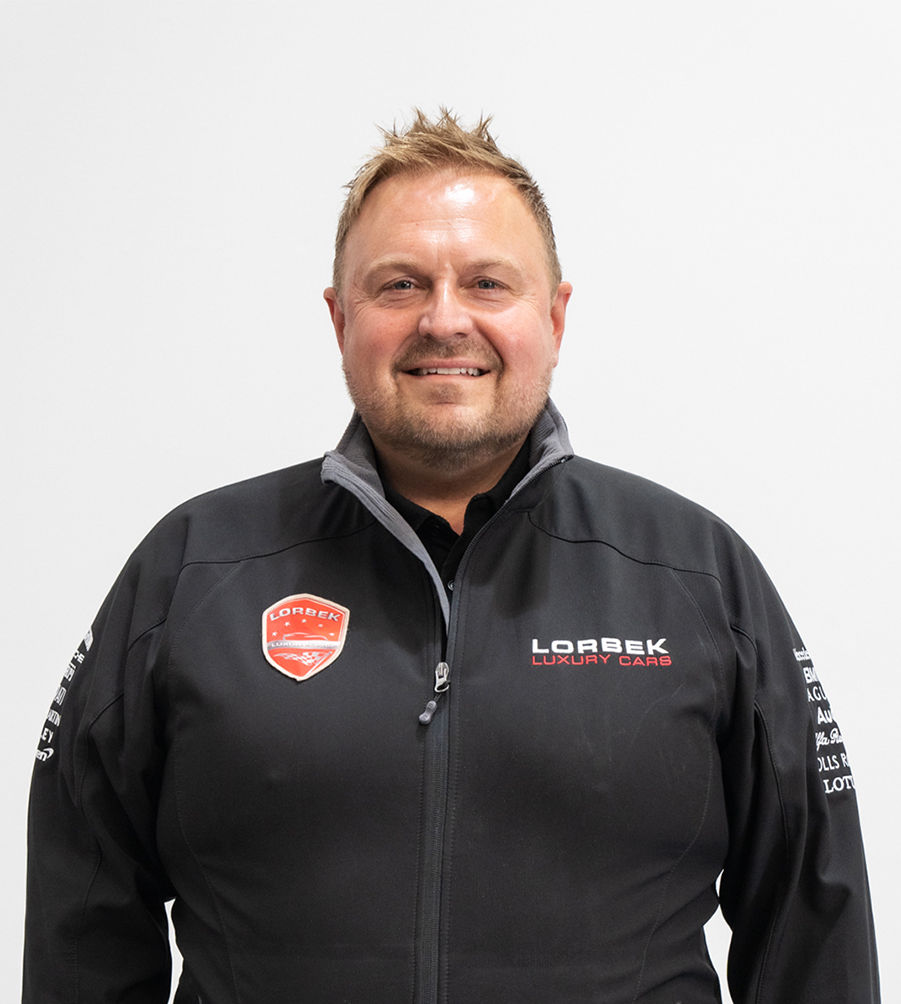 Growing up on a farm in a little country town with his brother, David followed Srecko into the Automotive Industry and entered his motor mechanic apprenticeship at the Lorbek Fairfield Dealership. David’s passion for sportscars soon found him helping on the showroom floor and interacted so well he quickly joined the sales team. Over many years of dedicated driven commitment, David has become one of the most knowledgeable experts on automotive trends and market movements, advising car owners and enthusiasts within the luxury, exotic and supercar world. His connections and association with most supercar and exotic car clubs has seen him become one of the most respected car enthusiasts and advisors Australia wide. 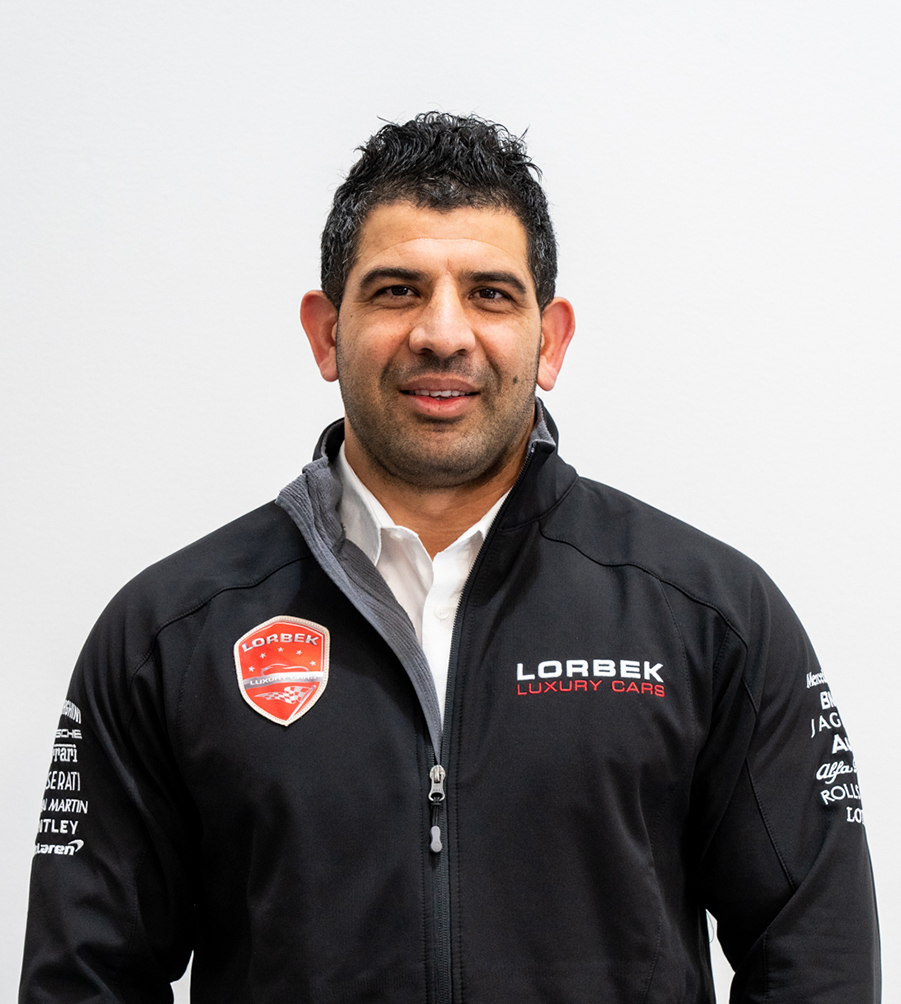 Inderjit has been part of the Lorbek team for over a decade and has shared the journey with us. Inderjit is head detailer in charge of our detailing department and oversees every facet of vehicle preparation from start to finish, trialling and continually testing new latest paint protection products and interior preservation products. The detailing process includes presentation for online photography and showroom display. The many years dedicated at perfecting his detailing techniques and skills including exterior to interior with attention to detail to every single vehicle has won us many accolades for vehicle presentation from customers all over Australia and our peers………“if it’s a car from Lorbek it will be beautifully presented”. Inderjit with his detailing team are determined and committed to present every car as best as possible with passion and excellence. 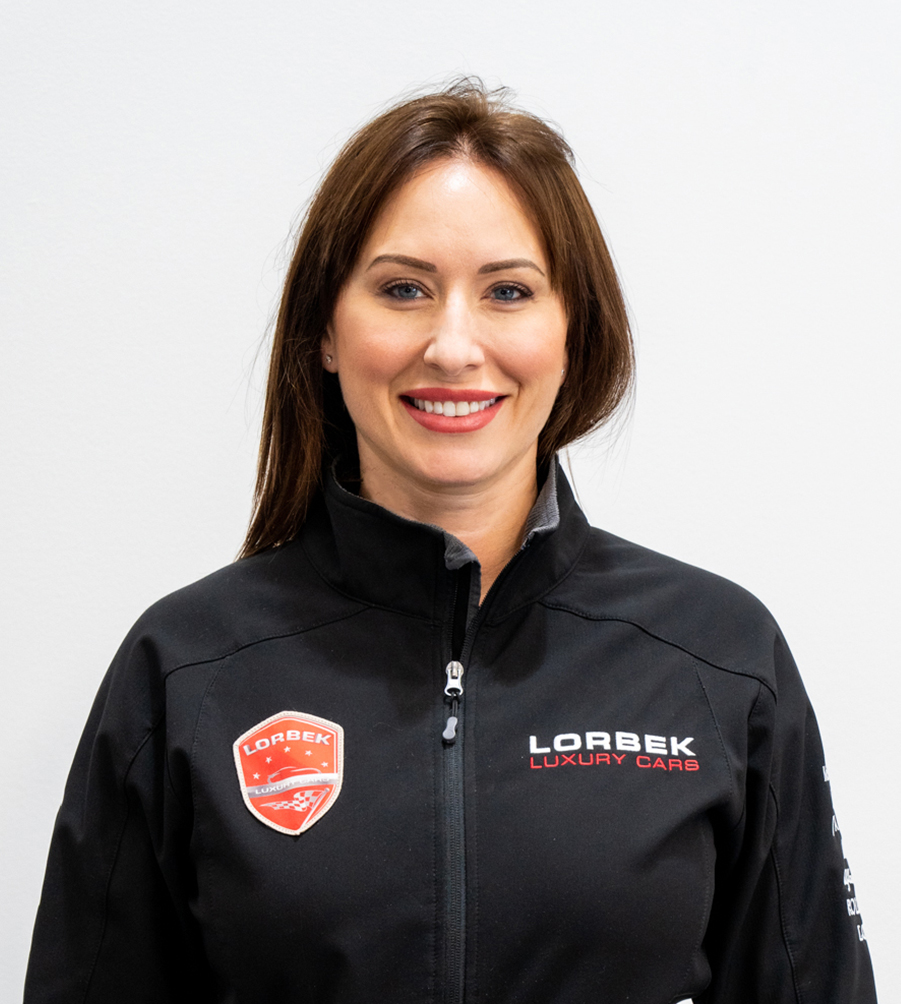 Elizabeth has been in the Automotive Industry for 15 years selling luxury brands, she has been with Lorbek Luxury Cars for several years now and has become one the most respected and internally recognised salespeople within the company. She strives to provide exceptional and incomparable service to every one of her clients, prioritising the building of relationships above all else. Her attention to detail and customer service skills have allowed Elizabeth to develop a strong, repeat customer base with loyal followers. Her down to earth attitude makes dealing with her a thorough, yet enjoyable experience. Elizabeth brings a warm approach to both our male and ever-growing female clientele. 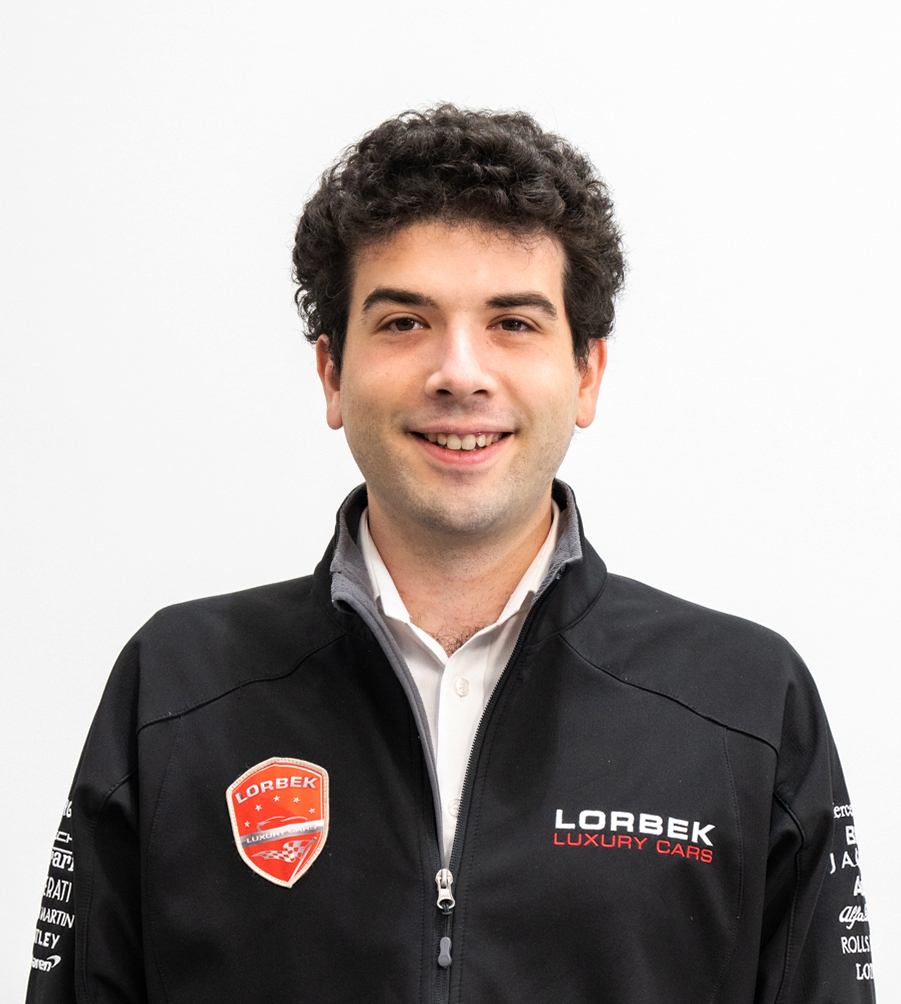 Marcus orchestrates all the video content and editing at Lorbek Luxury Cars. His day-to-day activities include filming new daily stock arrivals, creating exciting, innovate and vibrant edits for the Lorbek Luxury Cars YouTube, Instagram and Website pages. Marcus also edits the popular and well recognised weekly Friday drive with Harry Hamann. He brings a fresh approach to our Lorbek Luxury Cars stock list on our website with detailed videos allowing our customers across Australia the opportunity to view firsthand the exciting stock we have available every day. This enables them to make an informed decision to buy online. Please follow us on Instagram @LorbekLuxuryCars, @LorbekLuxuryCarsStock for new uploaded stock everyday by Marcus. 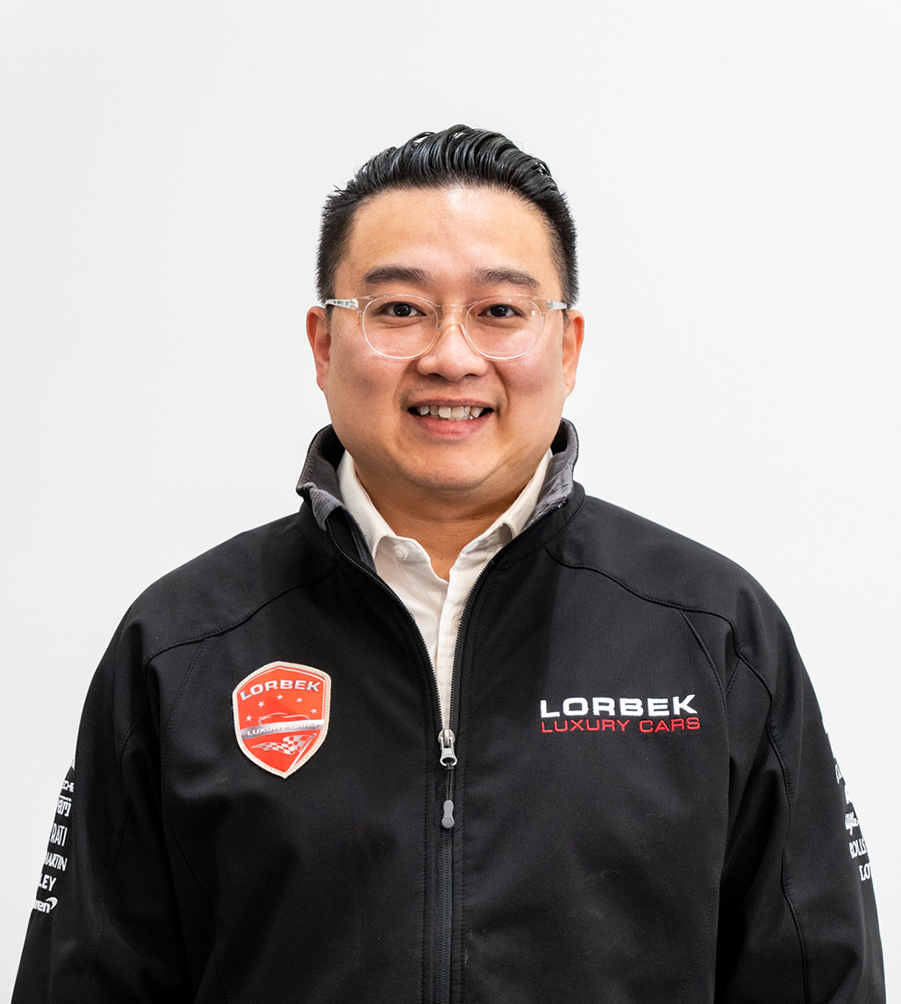 Tai completed a Bachelor of Automotive Engineering at RMIT University. His passion for cars has been an integral part of his life, he has immersed himself in the Automotive Industry for over 12 years. He began his automotive journey as a sales cadet and quickly evolved into leading operational roles with Mercedes-Benz Melbourne where he worked for over 7 years. His role as the Sales Support Manager at Lorbek Luxury Cars is to oversee the Sales Support Team, connecting with each client on a personal level to ensure every stage of the purchase from start to handover delivery is completed as efficiently and effectively as possible. Tai updates clients daily and assists them with all their requests to ensure ultimate customer experience and on-going service advice including maintenance and warranties. His experience has been an integral asset to the continued operational success of the company and its valued clients. 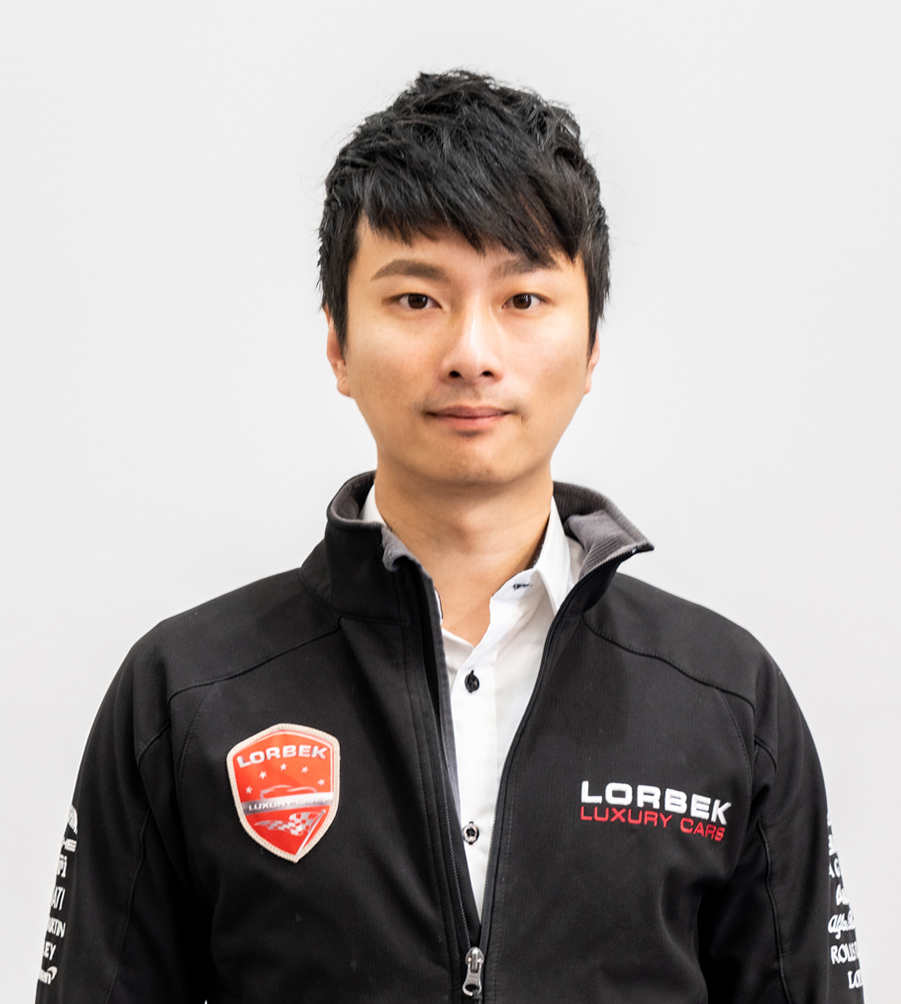 TK has been part of the Lorbek team and family for almost 10 years. He began as a coordinator of daily operations and is now in charge of stock control for the Lorbek Group both in Melbourne and Sydney. TK ensures quality control processes implemented to all our suppliers and contractors Australia wide. He overlooks the operation of vehicle preparation with attention to detail to provide the best presented cars for sale in Australia. TK is also responsible for development and execution of the integrated marketing platform, creative design for digital and print assets as well as internal and external communication including website, social media and advertising. TK is continually focussed on process stock improvement. 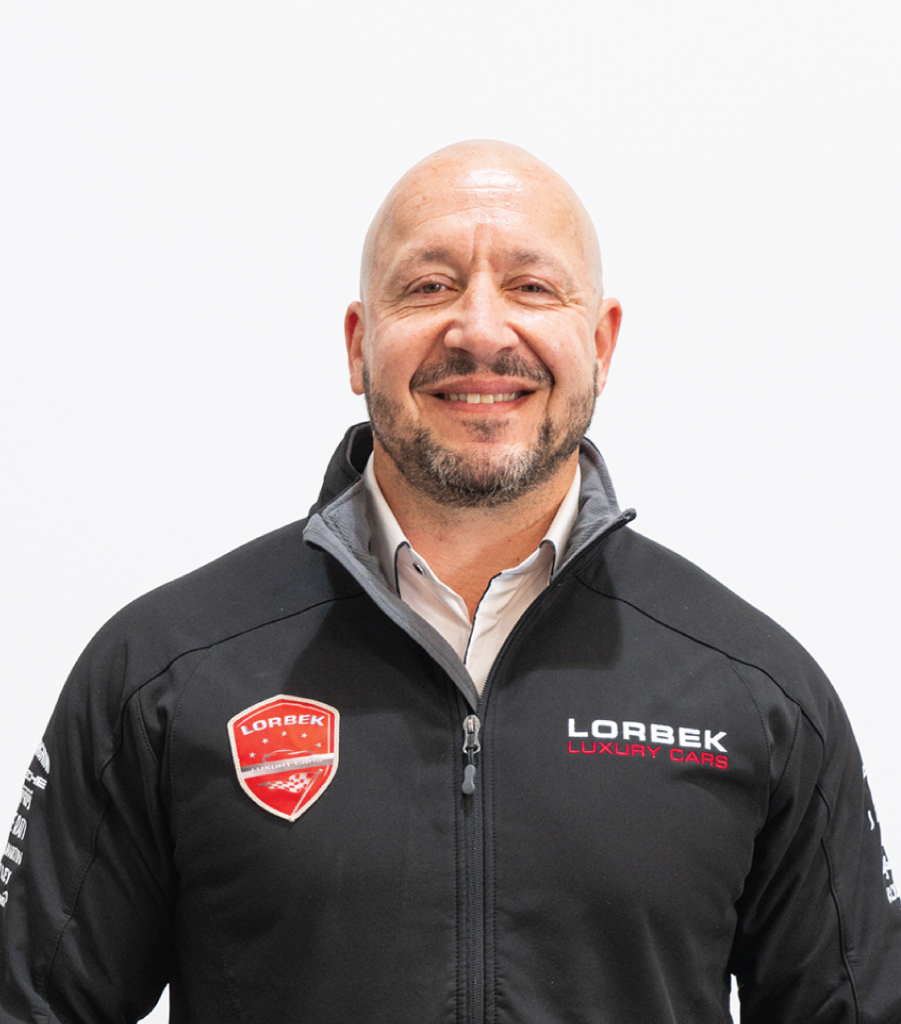 Joe is the newest member of the Lorbek Luxury Cars Family. With 15 years of experience within the prestige and luxury car sector, his knowledge, experience, passion and exemplary customer service have served him well over his career. After starting his career with Volkswagen and then BMW, it has led to an amazing journey selling such brands as Ferrari, Lamborghini, Bentley, Rolls Royce, Porsche, Aston Martin, Mercedes Benz, among many others. Always taking great deal of pride in making sure that the client is looked after like a family member, Joe has forged many ongoing relationships with clients that he still services today. Joe believes that buying a car should always be an enjoyable experience for everyone involved, and he would love to have the opportunity to look after you as well.